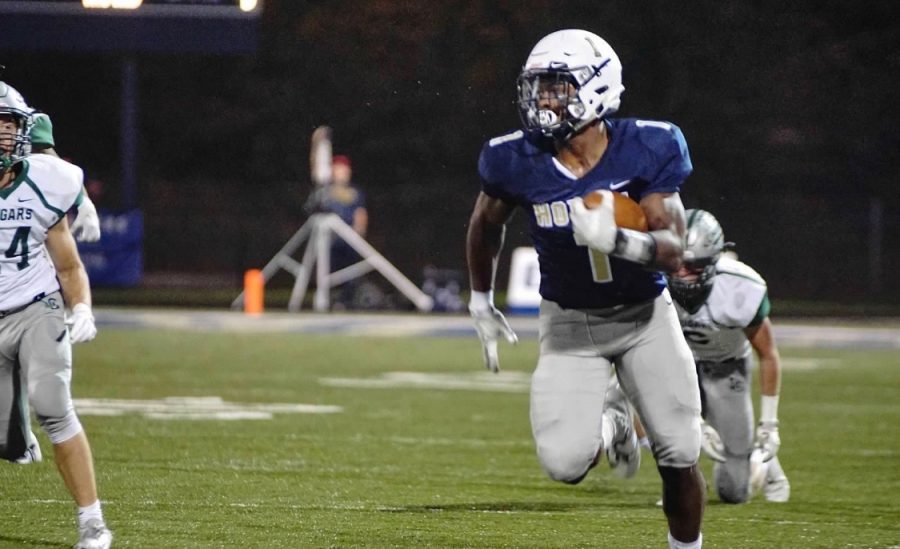 The running back position has always been vital in any strong football program. Collegiate backs such as JK Dobbins, Bryce Love and Mike Webber have found success in the trenches, running yard-after-yard for six. Ezekiel Elliott’s stellar career at Ohio State granted him the fourth pick in the 2017 NFL Draft, proving the need for powerful backs.

Hoban has boasted multiple star backs in recent years—senior Tyris Dickerson, an Eastern Kentucky commit and Todd Sibley, who now plays for the Pittsburgh Panthers. With such tremendous role models, young backs can only hope to emulate their success. Luckily, junior Deamonte Trayanum seems to be heading down a similar road.

Trayanum, a four-star prospect, is one of the most coveted players in the 2020 Ohio recruiting class. Ranked fifth in the state by 247Sports, his speed and strength seem destined to carry him towards his childhood dream.

“I’ve been wanting to play college ball for a while now, since I was like 8 years old,” Trayanum said.

His dream may soon become a reality, as Trayanum has been offered by 11 colleges, all Division I. Offers from Ohio State, Notre Dame, Wisconsin, Stanford, Michigan, Purdue, Boston College, West Virginia, Toledo, Vanderbilt and Rutgers decorate his list of options.

All 11 schools could benefit from Trayanum’s swift step and brawn. In his sophomore season, he rushed for 850 yards and 14 touchdowns—stats that cemented the third straight state title for the Knights.

However, Trayanum, affectionately known as “Chip”, doesn’t just affect the Knights’ offense. Many times, the junior will play strong safety for the defense, an opportunity which allowed him 14 sacks in 2017.

“I’m an athlete on the field I can play a lot of different positions but I intend to go to college for running back or strong safety,” he said.

His success both offensively and defensively have given the Knights an 9-0 (4-0 in the North Coast League) start to the season, and unparalleled confidence as they continue league play. Teammates trust in his ability to make powerful plays and handle the ball well, as he has proven his ability time and time again.

“It’s a great feeling when he is in the endzone because of how the offensive line worked together to put him in there,” Michigan-bound offensive guard Nolan Rumler said. “He’s a very important part of the team’s success.”

Currently, Trayanum is zeroed in on helping the team towards their two goals this season: an unprecedented and undefeated football season and a fourth straight state title. His recruitment will always be on his mind, but his focus remains on the team’s aspirations for now.

“All of my coaches have given me great advice on recruiting thus far,” Trayanum said. “I’ve been playing football for 9 years, so it took a lil time for the hard work to pay off.”

Trayanum’s exceptional work ethic makes him the definition of a student-athlete. Currently enrolled in one honors course and five other classes, he understands the importance of education, all while attending daily practices and liftings. He exemplifies many of Hoban’s Core Values: discipline, integrity and excellence—one reason why he received the 2018 Monsignor Dowed Award.

“Deamonte is a better young man than he is football player— he understands his academic career will take him farther than any sport can take him,” Coach Timothy Tyrrell said. “He is a leader of men.  He is not a the type of guy that will let people around him make bad decisions.  He is a true WINNER!”

So, while Dobbins, Love, Webber, Elliott and even Sibley and Dickerson have found success beyond high school,Trayanum’s prowess will continue to carry the Knights into the endzone. The two-position star has a bright future ahead of him, and only time will tell where Trayanum will resume his athletic and academic expertise. For now, he focuses on another state title, hoping to bring eternal glory to Hoban before he finds his own.