Girls Basketball: History in the making 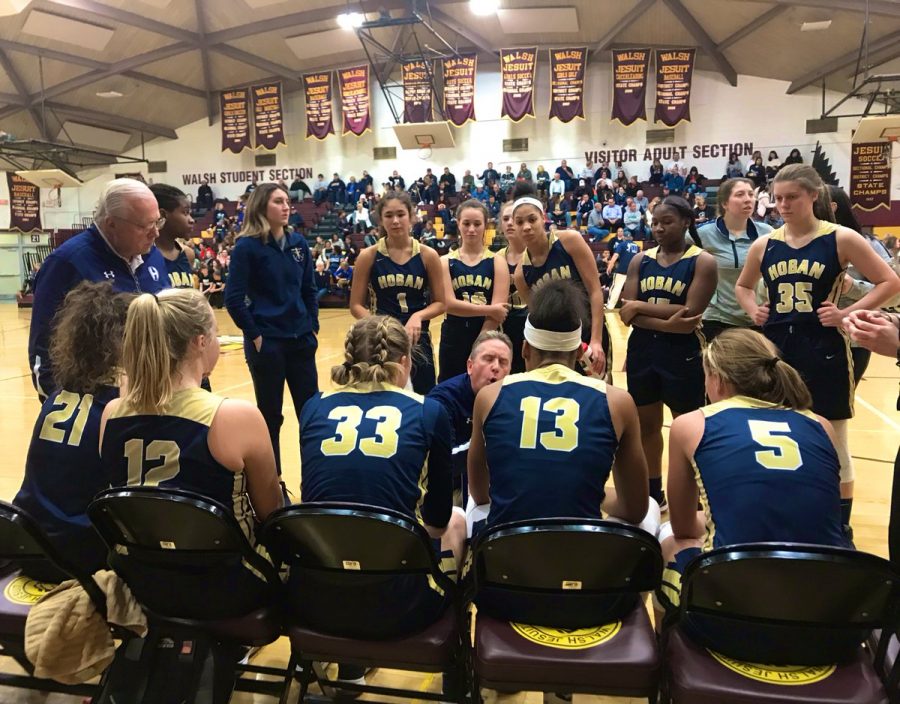 Elite. Experienced. Grateful—just a few words to describe the 2018-2019 girls basketball team. Comprised of seven seniors and three juniors listed on the varsity roster, the team utilizes these words as encouragement, views them as their theme for the season— a season in which they’ve added the word “undefeated” to their repertoire.

“It feels great to be undefeated,” senior captain and future University of Akron player  Lonasia Brewer said. “It feels good to all be as one and to be together and be able to have fun but still get our business done.”

“It feels amazing to be undefeated,” junior captain Jacqie Roberts stated. “This varsity team has gone through its ups and downs together the past two years. We’ve struggled through multiple injuries last year and also enduring Emma’s heartbreaking injury this year. Honestly, a lot of our motivation during games comes from playing for her.  It’s really cool to know we’re making history at Hoban and have the potential to be a great basketball team, but right now we’re focusing on taking one game at a time and locking in everyday in practice.”

Emma Tecca, another University of Akron signee, recently injured her left knee in an open gym. This injury comes off an ACL tear in her junior year, now causing her to miss both her junior and senior seasons. Tecca’s natural talent and shooting skills, however, locked her position on Akron’s team and while she looks forward to being back on the court, Tecca has accepted her role has a team supporter.

“When I got hurt in October it was a very difficult time to accept that I wouldn’t be able to play my senior year for Hoban,” Tecca said. “My coaches helped me by telling me even though I lost another season at Hoban, I could still look forward to playing basketball at Akron and that I needed to put the season into perspective and support my teammates to have a great year. My teammates always have my back and appreciate it when I come to support them.”

With Tecca’s support and the team’s chemistry, the girls have made Hoban history, becoming the first undefeated girls basketball team with the highest record, currently 16-0 and counting. Their journey is a testament to hard work and dedication, yet senior captain Megan Hutson credits their success to strong coaching, as well as the team’s determination.

“Coach Cal’s commitment to us, the other coaches and the trainers every day is unbelievable,” the 5’11” starter said. “He has practice plans, scouting reports, film, plays and more prepared all the time to help us reach our potential as an elite team. For morale, he is there for us as a mentor at one moment and then sitting in on our free-styling and dancing on the bus the next.”

In his eighth year as Hoban’s head coach, Scott Callaghan’s dedication to his team is unparalleled. With a record of 124-48, Coach Cal asks only one thing of his players—to improve by one percent every day.

“Because we were a good practice team the first one and a half months of the season, we experienced a great deal of growth,” he said. “This team has developed a defensive identity, and it has learned to play through that identity. We are blessed with seven seniors, who have led by example and shown unconditional love towards every player in our program. Because our seniors are mature, they have been able to unite the underclassmen. We expected to be a very competitive team this season, yet we know that we have a lot of room for growth and that we have not yet played our best basketball.”

“Coach Cal is such a tough coach mentally and physically to play for and that’s what makes us such a good team,” Roberts added. “He pushes us to our limits everyday and does everything in his power to make us great. He and our entire coaching staff have put in countless hours working before and after practices and watching opponents and making pages of scouting reports. This staff gives up their time from October to March for our team. It’s amazing to have coaches that care for this program as much as they do and dedicate so much time to making us better.”

Under the leadership of Callaghan and captains Hutson, Roberts and Brewer, the girls have outscored their opponents 954-471 this season, and the number keeps rising. Hutson believes that the key to staying undefeated lies in winning each practice as a family, united under the desire to become better.

“Like any team, you have your highs and low,” she stated. “To be the team that can overcome those days you would rather not step onto the court and instead win the practice for that day is quite incredible. The best way I can lead my team as captain is with my voice—constant talking, communication, and encouragement are critical to keeping our family together and successful.”

Family has also been a key word for the 2019 team, yet Callaghan has always preached it’s importance. Between locker room jams, pre-game hype-ups or bus rides filled with rapping and singing, the girls have bonded over the past three years of playing together and it’s in their sisterhood that their game has flourished.

“Family is what makes Hoban so uniquely great,” Callaghan said. “Many giving people have enthusiastically encouraged us this season. Our parents have been amazingly supportive. The administration, faculty and student body have shown a genuine interest in our team. Our alumni/former players have been in contact with our players. Our players know that they are playing for the entire Hoban family.”

As the team gears up for playoffs, their words will continue to carry and uplift them—elite, experienced, grateful and, of course, family. The team is setting their sights high, yet will be focused on taking every practice, lifting and game one step at time, hoping to solidify their legacy as a great and historical team, all while striving to stay truly undefeated.