How to fix the referee problem in the NFL 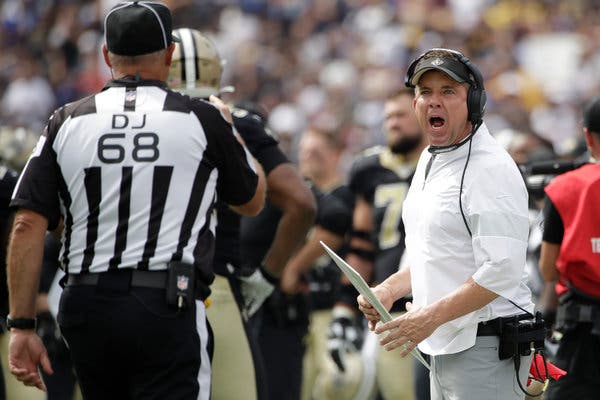 photo via The New York Times

It was Jan. 20, 2019. The New Orleans Saints were playing in the NFC Championship Game against the Los Angeles Rams. The game was tied 20-20 with nine minutes left and the Saints quarterback, Drew Brees, threw a pass to wide receiver Tommylee Lewis. Before the ball reached Lewis, Rams cornerback Nickell Robey-Coleman delivered a hard hit, rendering Lewis unable to make the catch.

The Saints frantically looked around for a flag, as it seemed obvious that there was a pass-interference penalty. However, there wasn’t a flag to be found.

Robey-Coleman’s tackle prevented the Saints from scoring, and the Rams went on to win on account of the missed call. Within minutes, the world decided that the Saints lost solely because of the refs, and a debate was quickly launched on how to fix the problem.

Over the last offseason, the NFL implemented a rule that allowed coaches to challenge pass-interference penalties. However, so far, this rule has done next to nothing, as only three calls have been changed all season. Just as well, the refs have only worsened lately; it seems that nearly every week a team loses due to a bad call. So, how can this recurring issue be fixed?

The first solution is holding the refs accountable for their mistakes, as the NFL does with players. Mandatory post-game press conferences could be set up for officials, giving them a platform to justify their actions or admit their mistakes.

Also, referees should be fined or have their pay based off performance, incentivizing them to make the right calls. The NFL often fines players for the smallest infractions, but refuses to fine refs for changing the outcomes of games.

The NFL should also make refereeing a full-time job. Currently, of the 121 refs, only 24 work full-time. During the offseason, they should receive additional training and improve their skills, not sit at home. This offseason practice would only help the issue.

Additionally, Al Riveron—the NFL officiating leader—must be fired. He was a ref for years before being granted this position, and he was known as one of the worst. The fact that he is telling all the refs what to do is ridiculous.

Every week, it seems like the refs focus on a different penalty to call. At the start of the season it was holding, now it’s illegal hands to the face. The refs appear to religiously target these penalties, often missing more blatant ones. The man telling these officials to focus on specific penalties is Al Riveron; in order to fix the issue, he must be relieved of his duties.

Finally, perhaps the best and easiest way to fix the ref problem is implementing a “sky judge.” He would be in the press box with a screen in front of him showing exactly what fans were seeing on TV. He would also have direct communication with the refs. If he saw anything blatantly wrong about the call on the field, he could talk to the refs on the field and correct the mistake. This would prevent blatantly terrible calls, such as the missed pass-interference in the Rams-Saints game.

A combination of these solutions should be utilized by the NFL to fix the catastrophe that officiating has become.